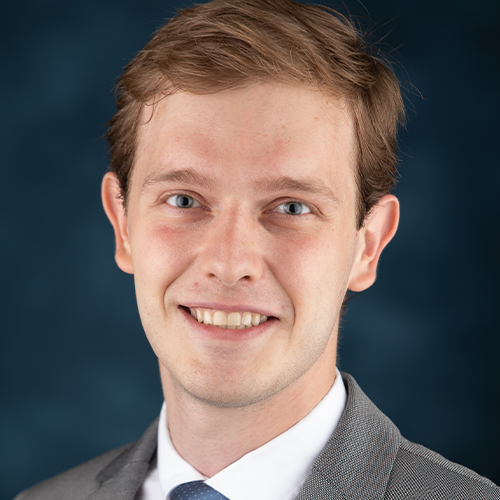 This nomination came from David’s co-residents:

David is a second year internal medicine resident at Georgetown, and his actions over the past month, particularly during our week together in the COVID ICU on C62, have demonstrated his outstanding character and commitment to patients and families. The patient-centered interactions that David had are too many to count, but here are a few examples.

A Spanish-speaking patient in his mid-50’s who was admitted on a few liters of nasal cannula rapidly deteriorated throughout the night and needed to be intubated the morning after admission. David not only took the time to explain to him what was going on, but he stayed with this patient throughout the intubation process. He was able to update the patient’s family and keep them informed of the situation, even though they could not visit the patient in person.

Another patient who had a devastatingly poor neurologic prognosis with COVID had a deeply religious family who were having trouble saying goodbye to their brother, who was like a father to them. David walked them through the process and let them know what was going on. The family members could not visit in person due to comorbidities of their own, but David was able to lead them through a virtual family visit so they could say their goodbyes.

Finally, (last anecdote of many), David helped a patient and his wife cope with his hospitalization by playing jazz music for the patient during the day, as he was an avid musician and loved jazz. David was in the room with this patient, holding his hand, while the patient was compassionately extubated. Even though his wife could not be in the room, David allowed his physical presence to comfort the patient during his last moments.

In addition, David returned to the ICU after moving on to another rotation to help with difficult video meeting with a family to whom he had connected weeks earlier.  His presence was a great comfort to the patient’s grieving wife and daughters. Our ICUs could not have cared for so many critically ill patients and tended to the needs of their scared and distraught families without our residents’ dedicated focus and un-fatigable compassion.

I’ve been inspired by David’s actions, and I truly think he is a role model for other residents. Furthermore, I’d like to recognize that countless other internal medicine (and Med/Peds) residents have stepped up to the plate and shown their compassion for patients and families during this difficult time.